The Olympic Fire from Morgedal

The Olympic Torch has been lit in Morgedal three times, for the Winter Olympics in 1952, 1960 and 1994.
All the lighting ceremonies have been held at Sondre’s birthplace, Øverbø, followed by huge, lively, community celebrations in the valley.

A traditional pinewood torch has been used every time at the Øverbø ceremonies.
In 1952 the torch was made by Olav Strondi and the next two times by his son, Eivind Strondi.
Present in the Sondre cottage during the lightings, have been one ski veteran and one representative for the younger generation, both from Morgedal.

A Torch for the VI Olympic Winter Games – Oslo, Norway, 1952

Ski enthusiasts from Morgedal present the idea of an Olympic Torch Relay. For the first time ever, a Torch Relay is organized for the Winter Games.The ceremony takes place on February 13, 1952. From the fireplace inside the Sondre cottage, the pinewood torch is lit by Olav Bjaaland, a ski veteran who also participated in the Roald Amundsen South Pole Expedition. Sitting next to him at the fireplace is 10-year-old Olav Tveiten.

As Olav Bjaaland leaves the cottage with the torch, the chairman of the Morgedal Sports Club, Øystein Strandi is waiting outside with the special Olympic Torch holder. The fire is lit from Olav’s pinewood torch, and Øystein hands the torch over to Olav Hemmestveit, son of the famous Morgedal skier Mikkel Hemmestveit.

With the Olympic Torch in his hand, Olav is skiing down the steep hillside. The people of Morgedal gather for a ceremony at the Sondre memorial stone in the centre of the village, and from there the Torch Relay sets off, heading for Bislett Stadium in Oslo, 200 kilometres away.There are 94 skiers participating in the relay. The torch holder is handed over from skier to skier, as they follow the same route as Sondre and his fellow skiers from Morgedal did back in 1868, when they participated in a skiing competition in the nation’s capital, and impressed everyone with their new technique. The Olympic Flame is lit on February 15 by the final torchbearer, Eigil Nansen, grandson of Fridtjof Nansen, the famous explorer. The games are opened by HRH Princess Ragnhild.

This second Olympic Torch ceremony in Morgedal takes place on January 31, 1960. From the fireplace inside the Sondre cottage the pinewood torch is lit by 80-year-old ski veteran and Royal cup winner Eivind Donstad. Sitting next to him at the fireplace is 12-year-old Olav Nordskog.

As Eivind Donstad leaves the cottage with the torch, he hands it over to the chairman of the Morgedal Sports Club, Eivind Strondi. Then it’s time to light the fire in the special Olympic Torch holder – the same holder which was used here at Øverbø in 1952. For the second time Olav Hemmestveit is waiting with the holder, and the fire is lit from Eivind’s pinewood torch. 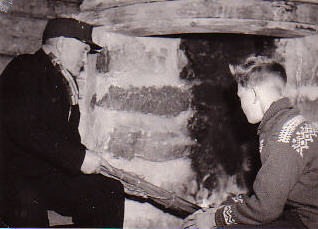 With the Olympic Torch in his hand, Olav is skiing down the steep hillside, just as he did back in 1952. He is followed down the hillside by several young skiers from Morgedal. Finally they all gather at the Sondre memorial stone in the centre of the village, where a special ceremony takes place.

This time the fire from Morgedal is going to be sent all the way to Squaw Valley in California. The first lap is Morgedal to Oslo by car and the second is to Los Angeles by plane. Olav Strandi is escorting the torch to Oslo Airport Fornebu where a plane marked with the text “Olympic Flame Carrier” is waiting to cross the Atlantic.

The Olympic Flame is lit in Squaw Valley at February 18 by the 1952 Olympic champion in 500 meter speed skating, Ken Henry. The games are opened by Vice President Richard Nixon. The fire from Morgedal is still burning in Squaw Valley.

A Torch for the XVII Olympic Winter Games – Lillehammer, Norway, 1994

This time there is a two-day ceremony in Morgedal. The ceremony begins at Øverbø late in the evening at November 26, 1993. A lot of people, most of them carrying torches, have walked the path up the steep hillside, and are now gathered in the yard this cold, starlighted night. Among the invited guests is Dorothy Lyon of Atlanta, a great grandchild of Sondre. She is here as a guest of honour, invited by the Lillehammer Olympic Organizing Committee (LOOC). Also present are Norwegian Minister of Culture, Åse Kleveland and President and CEO of the Organizing Committee, Gerhard Heiberg. The events at Øverbø are broadcast live on national TV.

Norwegian fire-lighting champion, Olav Bekken is invited to ignite the fire by using an old traditional technique. Olav is sitting in the middle of the crowd, spinning a piece of wood around, faster and faster, as it is pressed toward another piece of wood. The heat increases, and a few minutes after midnight a small ember is visible. Bekken blows intensively to keep the fire alive – and the fire survives. The pinewood torch is lit, and Olav Bekken carries the torch the few metres to the cottage door, where he is met by Eivind Strondi and the seven-year-old Knut Råmunddal. Eivind then brings the torch to the fireplace inside the cottage, where the fire is lit and will be burning all night.

Next day HRH Princess Märtha Louise arrives at Øverbø together with other prominent guests, as live TV coverage resumes. Exactly at 12 noon the Princess lights the pinewood torch from the fireplace, as Eivind Strondi and Knut Råmunddal are present by her side. Outside the cottage she hands it over to the first runner, snowboard world champion Åshild Lofthus of Vinje in Telemark.

Several runners (running on their feet, not using skis) participate in the relay down to the centre of Morgedal, each of them carrying their own pinewood torch. The torches are lighted with fire from the previous runner. Down in the valley an audience of 5,000 people have gathered to join the ceremony.

Minutes before entering the ceremony arena, the last runner, Knut Tore Apeland of Edland, Telemark is lighting an eternal flame at a special cairn in Lake Morgedal, just in front of the Sondre statue. The fire is still burning, as a memory of the Olympic ceremonies in Morgedal.

During the ceremony in Morgedal there are traditional folk songs and music, and there are speeches by Gerhard Heiberg, Åse Kleveland and other official guests. Finally, alpine skiing champion Atle Skårdal of Lunde, Telemark sets off with the torch – from now on it’s not a pinewood torch anymore, but a torch with a chemical flame.

During a 75-day long Torch Relay about 7,000 torchbearers carry the flame to all parts of Norway, including Spitsbergen in the Arctic Ocean. The total distance is more than 8,000 kilometres. Wherever the Morgedal fire arrives, there are cultural events and lively festivals.

Speaking in Morgedal, the Minister of Culture, Åse Kleveland describes the Torch Relay as the biggest manifestation of cultural activity in Norway ever. She is referring to the fact that more than 2,500 cultural events would take place around the country during the next 2.5 months.

Organized by the Norwegian Post, the relay brings the Morgedal fire successfully to Lillehammer, where HM King Harald V is opening the Olympic Games on February 12, 1994.

The Morgedal Flame and the Olympic Flame

It was planned that the flame from Morgedal should unite with the flame from Olympia in Greece when the two torches met in Oslo on February 5. Because of Greek opposition against mixing the flames, however, they were held separately. There were high level discussions about this a short time before the torches met. So when HRH Crown Prince Haakon was lighting the Olympic Flame at the opening ceremony in Lillehammer, he used the torch brought from Olympia.After Lillehammer, the flame from Morgedal continued to the Paralympics, held in the mountain ski resort of Beitostølen.

In 1952 and 1960 the flame from Morgedal was used when the official Olympic Flame was lit at opening ceremonies in Oslo and Squaw Valley.

Eternal flames in Morgedal and Minot

On December 1, as the Torch Relay is in Skien (the Norwegian sister city of Minot, North Dakota), a branch of the fire is picked up by then North Dakota Governor Edward Schafer. He brings this torch on the plane back to Minot, where it is carried by Minot and Bottineau ski patrols to Sondre’s gravesite at Norway Lutheran Church Cemetery south of Denbigh. Lars Berge Haugan of Morgedal carries the torch on the last leg, and a ceremony is held at Sondre’s grave on December 3.

The next day the torch is transported back to Minot again. Here the Sondre Norheim Eternal Flame is lit by Lars Berge Haugan, close to the Sondre statue in the Scandinavian Heritage Park.

The Eternal Flame Monument was designed by Minot artist Sheldon Larson. The five aluminium skis symbolizes the five Nordic countries. The globe represents the many contributions to the sport of skiing that Sondre gave to the world. The flames in Morgedal and Minot are still burning. 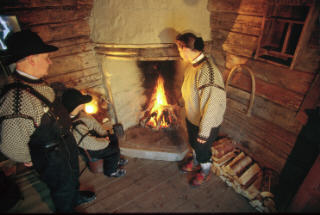 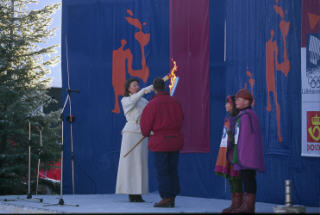 The torch for the relay, carried by Gerhard Heiberg, is lit by fire from the pinewood torch, held by Åse Kleveland. To the right: the Olympic Mascots.
Photo © Kjetil Rolseth

Edward Schafer is picking up a branch of  the torch in Skien
Photo by Per-Eirik Hekkelstrand, Varden

The Skiing Pioneer of Telemark
email@sondrenorheim.com
Copyright © 2002 - 2021 by Anne-Gry Blikom and Eivind Molde
All rights reserved