Morgedal – in the Heart of Telemark

Morgedal is a small village centrally located in the county of Telemark, southern Norway. As a part of the municipality of Kviteseid, the village is situated about 200 kilometres or three hour’s drive from the Norwegian capital of Oslo, along highway E 134 between eastern and western Norway. Morgedal has about 300 inhabitants. Most of them are working in tourism, the service industry or farming. The village has a hotel and other accommodations.

Also located in the village close to Lake Morgedal (423 metres above sea level) is the Norwegian Ski Museum Morgedal (Norsk Skieventyr). On the hillside one can find Øverbø, the former cotter’s farm where ski legend Sondre Norheim (1825-1897) was born.

In the 1850’s a flourishing ski environment arose in Morgedal inspired by Sondre. Skiing became a very popular recreational activity where people experimented with new techniques and equipment. Later, Sondre and his followers came to the nation’s capital where they demonstrated their new way of skiing. This Telemark style and the equipment used by the skiers from this valley became a model in the further developments of skiing as a sport, both in Norway and abroad. Because of this, Morgedal has been called the Cradle of Skiing, and Sondre the Father of Modern Skiing.

The valley of Morgedal
Photo by Eivind Molde

Because this small community has had such an important impact on the history of skiing, Morgedal has been chosen as the place for lighting the Olympic Torch three times. A statue of Sondre is located close to the museum, a memorial stone erected in the same area, and an eternal flame shines day and night from a special cairn in Lake Morgedal.

Morgedal is also known as the birthplace of other famous skiers, such as the Mikkel and Torjus Hemmestveit brothers, Svein Sollid and Jon Hauge. Olav Bjaaland, who participated in the Roald Amundsen South Pole Expedition (1910-1912) is also among the recognized skiers. The Olav Bjaaland Museum which opened in 1966, has become a part of the Norwegian Ski Museum Morgedal. This museum opened in 1993.

Here is the place where Sondre was born – a small former cotter’s farm upon the wooded hillside. From Øverbø, located at about 580 metres above sea level, there is a breathtaking view of the valley of Morgedal.

Late in the 19th century there were close to 100 such small cotter’s farms in this community. About 500 people lived in Morgedal at that time, 200 more than today.

Over the years, there have been a few changes at Øverbø. The Morgedal Sports Club along with the Association for the Promotion of Skiing, located in Oslo, assumed responsibility for it in 1949. Since then, many dedicated community volunteers have enabled it to become a popular tourist destination.

The house to the left: This is the house Sondre built when he married Rannei in 1854 and the couple settled at a cotter’s farm called Kasin. The sports club moved the house to Øverbø to become a part of the museum. This building is open to the public and inside you can see various equipment made by Sondre himself, including, of course, skis and bindings, along with cupboards and cabinets. Notice the fireplace where the Olympic Torch has been lit three times.

Prior to 1949 there was a barn and a small storehouse where the Sondre cottage is placed now. So the small farm had a total of four houses at that time. The house in the middle: This is the cowshed in its original form. The house to the right: Sondre was born in a house similar to the one you see in the picture. The original house was in such bad shape that the sports club built an exact replica and placed it on the original foundation.

The Morgedal Sports Club now owns Øverbø and is responsible for maintenance. A 400-meter stroll up the hillside after parking your car enables you to view the historic birthplace of Sondre Norheim. Most visitors combine a visit at Øverbø with visiting the Norwegian Ski Museum Morgedal (Norsk Skieventyr). 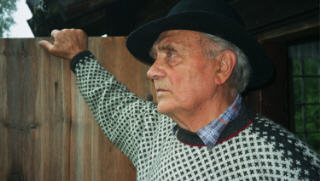 Eivind Strondi (1921-2016) in the Sondre cottage.
Eivind was a ski veteran and active Morgedal Sports Club
member who lived on the farm closest to Øverbø.
He guided visitors to Øverbø from 1951.
Eivind was Sondre's grandnephew.
Photo by Eivind Molde 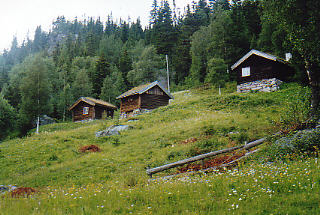 The Skiing Pioneer of Telemark
email@sondrenorheim.com
Copyright © 2002 - 2021 by Anne-Gry Blikom and Eivind Molde
All rights reserved